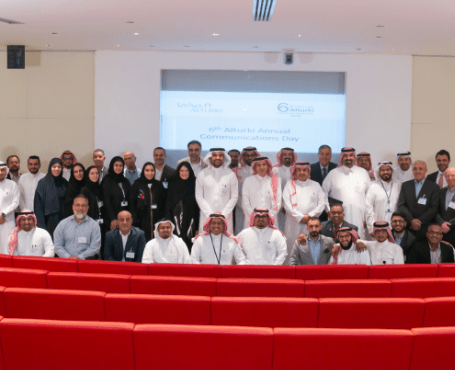 Communication is a key component to any company because it facilitates productivity and efficiency between the employees. Open communication helps in increasing employee morale, transparency and commitment if they are able to communicate up and down the communication chain in an organization. Openness in the workplace is one of Alturki’s PERFORM pillars, which was applied and cemented during the 6th Annual Alturki Communications Day.

In an effort to apply openness and create a transparent work culture, Alturki Holding hosted its 6th Annual Alturki Communications Day on Monday, the 14th of May 2018 in Alturki Business Park’s auditorium. The event was led by Alturki Holding Chairman Sheikh Khalid Ali Alturki, and the CEO & President Mr. Rami Khalid Alturki. Among the audience were holding employees and subsidiary MDs.

The event’s first session was led by Mr. Rami Khalid Alturki where he talked about Alturki Holding’s achievements and performance in the year of 2017, and later presented this year’s objectives such as nationalization, implementation of better safety measures, compliance, and the effects of Vision 2030 on Alturki holding and means of participation. The following session was led by Sheikh Khalid Ali Alturki where he talked about his view from the top as the chairman, and how the Holding was able to maintain a steady position regardless of the changing economy and past recession. An interactive session came next where employees were given the chance to anonymously answer important questions, and compare those answers to those of last year on topics like satisfaction and current culture. Also in attendance were the Sandler Training coaches, Mr. Linc and Mr. Mark where they shared insight with employee behaviors and the reasoning behind some of those answers.

Following the coaching session, a panel was held moderated by Mr. Eyad Ramlawi, who was joined by the CEO and VPs where anonymously submitted questions were addressed and discussed. The fourth session was led by Mr. Mohammed Rakib, who took the audience through i2’s journey of success, and Mr. Bader Aldulaimi led a session discussing the Short-Term Incentive program (STI), the grading system and the new Performance Management System (PMS). The event was concluded with a presentation from the Sustainability Department where the team talked about the department’s yearly goals, strategic plan and Youth In.