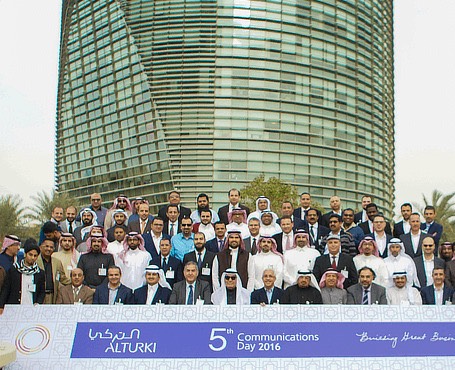 Communication is an important aspect to achieving an efficient employee performance, and creating a thriving work environment. Having a distinguished work environment where respect, transparency, and openness between employees, management, and stakeholders are applied has always been embedded within Alturki’s PERFORM values.

In an initiative driven from our constant strive to create a transparent, open, engaging and rewarding work environment, of which communication is an essential key; Alturki holding had hosted its 5th Annual Communications Day on Thursday, December 15, 2016, in Alturki Business Park. Alturki Holding Employees, subsidiaries MDs, Directors and other representatives from 11 of our subsidiaries and joint ventures, had attended this interactive event.

The event’s program included a number of sessions conducted by notable leaders from the Alturki, followed by an exhibition and was concluded with a barbecue at the park. The key sessions covered an array of topics revolving around the importance of strategic communication in achieving success amidst economic turbulence.  Sheikh Khalid Alturki, Chairman, had led the sessions with a discussion of the company’s positive stance despite the recent changes that occurred in the economy.  Rami Alturki, CEO and President led the following session, where he reviewed Alturki’s 2016 impressively sturdy performance, abilities to adapt to the market following 2030 vision as well as the numerous attained accomplishments. Alturki reviewed as well, the economic outlook of Saudi Arabia, 2030 Vision and its impact on the business, Alturki Holding 2030 Strategy, 2017 initiatives, and Alturki’s Triple Bottom Line Sustainability plan.  The sessions were followed by a panel discussion that covered the company’s history, challenges and most notable achievements, and was concluded with a Q/A session, where employees were given a chance to communicate directly with senior management.

The sessions were followed by an exhibition held in at Saud Bin Nayef Park where all subsidiaries had booths and representatives to present their business, and achievements. Communication day was concluded with a barbecue at the park; a gesture that further administers’ Alturki’s determination on incorporating fun in the business environment. The exhibition and dinner were an opportunity for Alturki employees to mingle, network and get to know their counterparts and peers in a friendly and relaxed setting.