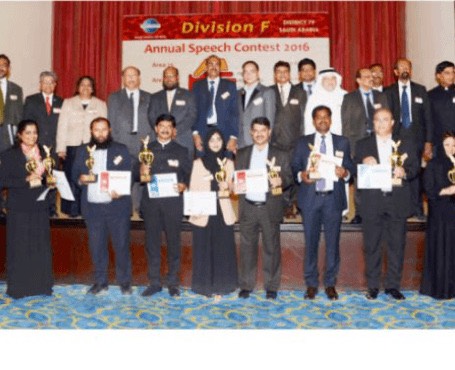 AL KHOBAR – In a pleasant ambience, members of Toastmasters fraternity gathered at Sofitel Hotel here to witness the Division F Annual Speech Contest. The event was a grand success and set a high standard in terms of its meticulous planning with the contest theme: Engage, Encourage, Empower.

DTM Alex Philip, Division F director, welcomed the gathering and thanked the contest organizing committee for their efforts. He expressed his gratitude to the sponsors for their support. He also thanked the members in completing their speeches and leadership projects and bringing more members to their respective Clubs, which helped Division F as one of the leading Divisions of Toastmasters 17 Divisions in Saudi Arabia.

DTM Abdulrazak Ali Alturki, a key advisor of District 79 and Managing Director of Namma Cargo Services, was the Chief Guest of this event. Other dignitaries included District 79 Director DTM Abdullah Al Sharif, Program Quality Director DTM Rashid Ali and Club Growth Director DTM James Taruc. The dignitaries addressed the gathering and inspired the audience highlighting the importance of Toastmasters, its benefits and the need to convey the message of Toastmasters to the community to bring more members to the clubs and open new clubs so that more members can learn the art of better communication and leadership.

The Keynote Speaker TM Abdullah Al Abandi from Saudi Aramco, an eminent motivational speaker, delivered a speech about Power of Connecting. He informed the audience about the techniques to effectively connect the audience and how to deliver a powerful speech that would inspire the audience.

The contest commenced with International Speech contest. This was a 5 to 7 minutes speech delivered on a topic of speaker’s choice devoid of sex, religion or politics. Eight speakers from four areas enthralled the audience with their inspirational and thought provoking speeches. TM Palani Kumar of Harmony Toastmasters Club bagged the first place in the International speech while TM Juveria Khan of Horizon Toastmasters Club and TM Syed Mansoor Shah of Urdu Toastmasters Club won the second and the third place respectively. The first place winner TM Palani Kumar will represent Division F at SATAC 2016 to be held at Sheraton Hotel Dammam from April 21-23.

Table Topic Speech Contest was another interesting Contest where the contestants had to deliver an impromptu speech for 1 to 2 minutes on a topic given on the spot. The first place of this contest was bagged by TM Atiya Firdous of Alturki Toastmasters Club while the second and third place winners were TM Rekha Rejesh Shetty of Phoenix MASA Toastmasters Club and TM Toufiq Chawdhury from Abdullah Fouad Toastmasters Club.

DTM Jacob Kuriakose and TM Naseem Shehri were the chief judges for this contest.

TM Jacob Mathew designed and delivered the contest magazine to all the attendees. The magazine contained messages from the dignitaries and officials, articles from various toastmasters, photo gallery and children’s artworks.